What is the One Thing You’d Change in Your Favorite MMO?

What is the one thing you’d change in your favorite MMO?

Here’s my take for 2 excellent games I played over the past year: World of Tanks (WoT) and Guild Wars 2 (GW2).

What I’d change in World of Tanks

WoT has game mechanics which collectively create a high skill cap – player skill truly matters. One of the most important game mechanics is penetration, i.e. piercing the armor of a target to deal HP damage. Unfortunately, the use of premium ammo trivializes penetration.

Take for example an IS-4 firing at another IS-4, with the target tank properly angled to minimize the probability of penetration. Here are the heatmaps, one with premium ammo and the other with normal ammo: 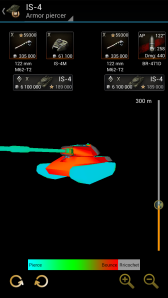 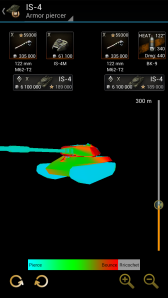 As you can see, with premium ammo makes penetration easy-mode (the target’s armor is green), because the penetration value is 82 points higher (340 vs 258).

Even with a lower penetration differential of 66 instead of 82, it’s still clear that firing premium ammo trivializes penetration.

I’ve been able to tell the difference in penetration even with differentials around 20, and premium ammo tends to provide an increase of 60+. One category of premium ammo (ACPR) is supposed to have more penetration decay over distance than AP ammo, but net-net is that premium ammo is still win. StranaMechty provided a detailed analysis on decay based on the game’s configuration data.

Some veteran players try to justify the presence of premium ammo by pointing out that it’s purchaseable with in-game currency, whereas it used to be purchaseable only with gold, i.e. real money. While that is true, for the following situations, a player may not be able to afford much or any premium ammo

Simply put, the presence of premium ammo favors paying customers and veteran players. Veterans already have the benefit of experience, and that’s enough of an advantage in a high skill cap game.

What I’d change in Guild Wars 2

The process of acquiring one full set of Ascended gear for one character is grindy as heck. The irony is that GW2 was positioned as having no gear treadmill pre-launch in the memorable ArenaNet blog article Is It Fun (bold emphasis mine):

When your game systems are designed to achieve the prime motivation of a subscription-based MMO…the best stat gear requiring crazy amounts of time to earn, etc.

Fun impacts loot collection. The rarest items in the game are not more powerful than other items, so you don’t need them to be the best. The rarest items have unique looks to help your character feel that sense of accomplishment, but it’s not required to play the game. We don’t need to make mandatory gear treadmills, we make all of it optional, so those who find it fun to chase this prestigious gear can do so, but those who don’t are just as powerful and get to have fun too.

There is no simple fix unfortunately. Ascended gear is deeply embedded in the game’s crafting, rewards for daily/weekly/monthly quests, and Fractals.

In my opinion, AN has been trying to solve for keeping players actively engaged and playing on a consistent basis. When player activity began to drop in the months after launch, my guess is that AN had a kneejerk reaction and Ascended gear was introduced into the game.

The underlying problem is that GW2 launched without meaningful horizontal progression at endgame, the kinds of things I’ve been talking about on this blog (Why Games Should Scale Horizontally Instead of Vertically and Why PVE Content Shouldn’t Be a Coral Reef), and as a result players complained about the lack of progression. And so we now have Ascended gear.

Players debate the value of Ascended gear over Exotic gear, but the general consensus is that Ascended gear provides a 5% increase in stats, with the weapons providing a larger benefit due to the increased weapon damage. Skilled players I’ve talked to in [oPP] (OverPowered People, a WvW guild on Blackgate) have told me that they believe it makes a noticeable difference, and that makes intuitive sense to me.

So that’s my take. What would you change in your favorite MMOs?

68 comments on “What is the One Thing You’d Change in Your Favorite MMO?”