Guide to the ELC AMX in World of Tanks

This guide covers the wildly popular ELC AMX, the tier 5 French light tank in World of Tanks (WoT). In my opinion, the ELC AMX is the most consistently incorrectly played tank in all of WoT, because players fail to adjust to its unique characteristics.

I’ve had very good results playing the ELC AMX as described in this guide, and hopefully it will help you improve your gameplay. 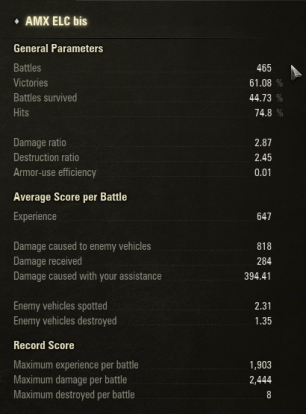 Rule #1: If You Can’t Aim at What You Spot, You’re Doing It Wrong

Most ELC AMX drivers do the exact opposite of this rule, i.e. they drive around like a chicken with its head cut off, and they either can’t aim their gun at their target because it’s not in front of them, or their aiming reticle is huge from driving and they miss badly.

The ELC AMX thrives when played as a hybrid TD/scout as opposed to an active scout (driving around to keep tanks spotted) or a pure passive scout (sitting in a bush and not firing), because the tank lacks a turret, the gun is potent, and the gun handles very poorly.

The most effective method of spotting in the ELC AMX is to find a position that provides you with a good field of view and adjacent hard cover. From such a position, you can spot tanks and fire on them, then pull back behind hard cover until you are invisible, at which point you can spot and shoot again.

While the ELC is incredibly mobile, you want to leverage that mobility in spurts, to either move to a new forward position, flex to a flank that needs help, or get behind or underneath a tank so that they can’t fire at you.

The key to success in the ELC AMX is to leverage its vision control, mobility, and the TD-quality gun while managing its poor gun handling and extreme fragility.

With these strengths and weaknesses in mind, your goal is to create first-shot opportunities, i.e. situations in which you spot the enemy and have sufficient time to aim and fire before they spot you. If you are spotted after firing, you should immediately pull back behind hard cover until you are no longer spotted.

On paper the low view range of 360 meters would seem like a meaningful drawback, but the ELC AMX has superb camouflage so you’ll often out-spot enemy tanks.

The ELC AMX when played properly is the ultimate ninja assassin – sometimes the tanks you’re firing on won’t even spot you.

When you’re spotted, there is a delay of 3 seconds before Sixth Sense procs. Given that, and the facts that the ELC AMX is fragile and has a long reload, after firing your gun it’s a good habit to assume that you’re spotted and behave accordingly, i.e. pull back behind hard cover.

You may be concerned that pulling back may cause you to lose spotting on enemy tanks, but remember that tanks remain lit for 5-10 seconds, so even if you pull back immediately after firing, you’ll know after 3 seconds whether you were spotted, and if you were not spotted you can move back into your spotting position. In most cases, the enemy tanks will remain lit during that period.

ELC AMX drivers like to do drive-by’s on targets, where they drive toward them, fire, then drive away. This can be very effective when it’s done carefully. Given the awful gun handling and long reload, when firing on the move you need to get very close to your target to ensure your shot doesn’t miss.

Obviously you don’t want to try a drive-by on an opposing tank if they are supported by other nearby tanks that will shoot you. The better option is to maintain distance, setup a first-shot opportunity, rinse, and repeat.

Against some taller tanks with poor gun depression (e.g. mid-tier Soviet heavies such as the KV-1S, KV-2, KV-85, T-150, etc), you can hug your opponent while you’re reloading, then reverse a bit to fire, then go back to hugging. You need to be careful that you don’t allow them to ram you; the ELC AMX is a paperweight and even slight contact with most tanks will damage and de-track the ELC AMX.

The recommended crew skills, in order of priority:

Basically the crew skills are selected to maximize vision control and gun handling.

If you have more than 4 skills on each crew member, you disgust me. /envy

Here is the first replay, where these concepts are demonstrated:

The ELC AMX gets scout matchmaking, so even though it is a tier 5 tank it sees tier 6-8 battles.

In tier 8 battles, you face tanks that can 1-shot your tank, so you have to play more carefully as compared to tier 6 battles.

All too often, ELC drivers die early and cripple their team’s spotting capability. I discuss and make two common mistakes in the second replay:

I have published an in-depth guide on light tanks, so if you’re looking for more tactics and tips, I recommend checking that out.

These videos are part of my “Road to Unicum” tank reviews in which I share what I’ve learned as I progress towards account Unicum rating (top 1%). I talk through how I’m reading each battle as it unfolds and discuss key decisions and mistakes. My hope is that these videos meaningfully help other players improve their gameplay.