Sometimes Games Do Evolve For The Better (Guild Wars 2)

In February, I was pretty burned out from World of Tanks (WoT) and decided to take a look at Guild Wars 2 (GW2), which I hadn’t meaningfully played since 2013. Most of my 2014 gaming time was spent on WildStar (WS) and WoT.

The following things collectively made GW2 unattractive to me:

Upon picking up GW2 again in 2015, I was pleasantly surprised to see that a lot of the things I disliked had been meaningfully addressed, and that other quality-of-life improvements had been implemented. It’s worth mentioning the value of the GW2’s B2P monetization system – it cost me nothing aside from disk space to patch up to the current version of GW2 and play again.

This was outlined in the March 2014 news article on the GW2 site.

The implications of course are massive. E.g. instead of having to farm Berserker Ascended gear for each of your characters, you could farm 1 set of Berserker jewelry and share them across characters, and to the extent your characters share the same weapons and armor, they can share those too.

Soulbound systems create a context where you have to do the same amount of work for each character, and this makes playing alts less attractive, which in turn I believe makes a game less sticky. Players love their alts.

Also, players who have more characters have more protection from class-specific nerfs and changes to the meta, and they are therefore less likely to leave a game when a particular class is nerfed. So I believe that for high-end endgame gear, having that gear be account bound makes a game more sticky for players.

This was a brilliant move by AN and synergizes with the previous improvement. You just need to login each day to get your daily credit, and I think AN has realized that if you login you might actually play that day. It certainly worked on me.

I utterly despised the previous system of random and completely unchallenging daily quests to earn laurels. Some gamers have the mentality that you should just have to do your dailies and suck it up, but that’s so not-fun for someone like me and is a perspective of the older gaming crowd (I’m looking at you, hard-working Gen X’ers).

Improvement #3: Dyes and skins changed from soulbound to account bound

Some folks don’t care about cosmetics, but I enjoying dialing in the look of each character. E.g. here is my 80 Guardian, with skins that were unlocked from my Warrior:

My Guardian sporting a classic plate armor look, a la the movie Excalibur

There’s nothing more depressing than playing in sparsely-populated zones. AN implemented megaserver technology, and the level 80 world zones consistently have the critical mass for events. 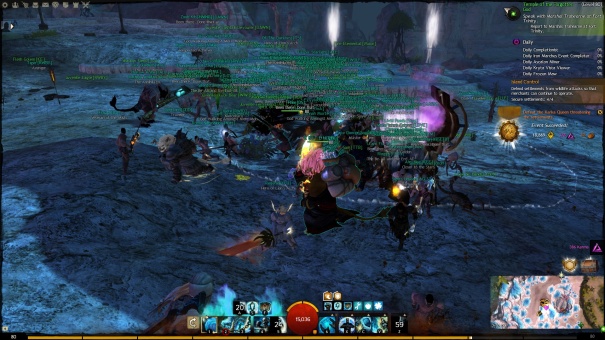 Events such as the Karka Queen draw mass participation

This one is self-explanatory. I actually stopped sPvP pretty much cold turkey after the first 6 weeks of launch, because I wasn’t leveling my characters to 80. Oddly, I haven’t gone back, but I think I got burned out by the PVP.

All these improvements aside, after two months of playing GW2, in which I geared my 80 Elementalist with some Celestial Exotic gear, leveled a Guardian to 80, and geared my Guardian with a mix of Exotic and Ascended Berserker gear, I’ve decided to put GW2 back on the shelf. I want a different combat experience than what GW2 offers – that is, issues #3 and #4 listed above are still issues. Beyond that, the game continues to be very pigeon-holed in terms of the meta. For multiple classes, Berserker is still the way to go, and that limits functional choice.

Nonetheless, I may come back to GW2 for the Heart of Thorns (HoT) paid expansion, given that once you pay, it’s free to play.

Beyond GW2, in the MMORPG landscape I’ve heard encouraging things about Camelot Unchained, and I look forward to trying it out.

In the meanwhile, I’ve picked WoT back up again and really enjoying it, and I just paid for early access for Armored Warfare, a game is a mashup of WoT’s tank-based combat and the smaller battles common in MOBAs.

What are you playing these days, and what do you think of the evolution of GW2?

EDIT (2015/05/14): I forgot to mention that I also gave SMITE a try in February. Many of you had recommended it to me as a MOBA that I might like, given that it has aim-based mechanics.

SMITE was more engaging than League of Legends (LoL), but I’ve come to realize that the whole meta of selecting heroes and upgrades as counterplay isn’t something that I’m particularly interested in, because in many cases there is a right upgrade path or two and a lot of suboptimal ones, in which case there effectively isn’t a choice to be made. I shelved SMITE after trying it for a couple nights and haven’t been sufficiently interested enough to play it again.