It’s been 6 weeks since I’ve posted anything. I’ve been waiting til I had good PVP footage to post on YouTube before I wrote more articles here, and on top of that I’ve been very busy in real life, but I wanted to stop and post my experience with Aion so far.

OK, that out of the way, the longer version.

First, let me establish what I look for in an MMORPG:

WAR, for example, met criteria #1 and #3 but failed miserably overall with #2. Aion definitely nails criteria #2, badly misses on #3, and is mixed in terms of #1.

There are several game design issues with Aion:

Let me stop there and say there are positive aspects to Aion, which include:

Let me stop with the opinions and talk a bit about what classes I’ve actually played since the game went live in late September. Here’s what I did:

There is definitely a part of me that wishes I had the interest and willingness to gut out the boring leveling ride from 25 to 42 for Chanter, at which point the class gets the first of several tools that should help in PVP.

I’ve been waiting to get to a high enough level to start making narrated PVP videos again. I’ve been more focused on leveling my Sorc than PVP’ing with him, because in the 30s Sorcs get some key abilities (e.g. I recently got the Wind Cut Down I stigma, plus Inferno at 31). So I’m almost there.

One other thing I should mention: the Aion forums community has been a disappointment, coming from WAR. Here’s how I’d rank the communities of the games I’ve played:

The main issue with the Aion forums is that people tend to criticize instead of help other players, and if you’re not level xx your thoughts and concerns aren’t considered valid, which to me is pretty inane, as a lot of class mechanics you can easily find out about by playing the class and reading the tooltips.

So there you have it. My first detailed take on Aion since it went Live.

I’m going to try leveling my Sorc and will hopefully get some narrated PVP videos posted on YouTube before end-of-year, but it may be challenging as I am working hard during the week (I recently joined a consulting firm full-time) and will be traveling overseas for work. 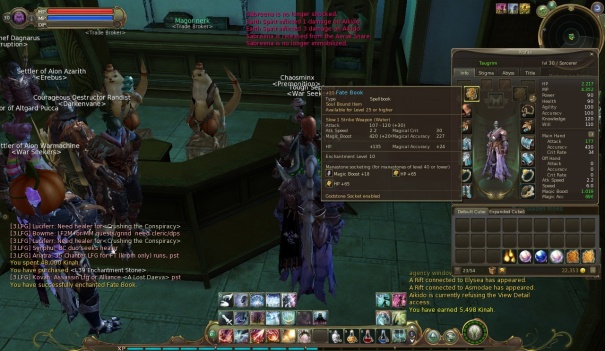