It’s been fascinating to watch the increasing level of real-time visibility of MMORPG content outside of the game.

One of the first advances made by game developers in this regard was to provide player and guild profiles on the web. Most of the major MMO’s (e.g. WoW, WAR, etc) provide profiles for each character, where you can see things such as their current gear.

Aion includes this; it’s “table stakes” in my opinion to have parity with competitors. E.g. here is a screenshot of my Chanter’s profile on aionline.com. 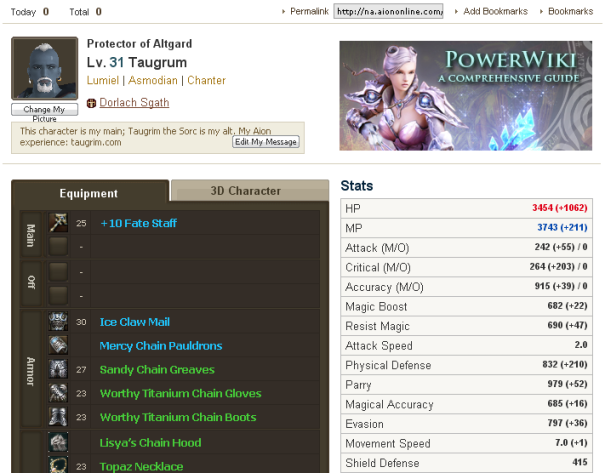 There are many reasons why this kind of information is very helpful, e.g.

However, Aion has gone further than just player and guild profiles. When you login to aiononline.com, you can see the status of your current Auction House (AH) items and how many of your friends and guild mates are online:

Aion limits a character to 10 items on sale on the AH. However, I can tell at any time which, if any, of my AH items have sold with a web browser. Even when I don’t have much time to login and play, this visibility has enabled me to keep my AH “stocked.” I’ll login simply to post new sale items when I know some items have sold.

We’re in the nascent stages of increased MMORPG access across “channels.” The market is evolving, and the question becomes, where is it evolving to?

Let’s consider social games. For many popular social games, you have a flexibility of playing the same game on Facebook, on a game site, and on your handheld (e.g. iPhone app) or on your PC. Social games create a strong “pull” for players by enabling them to experience the game regardless of their location; you can play via a web browser at home, at the office, while traveling, etc. On top of this, social game developers have learned how to create a sense of urgency that makes players feel the need to login and play. We see this phenomenon with “time management” games, such as Mafia Wars, where players have energy that is expended on missions and regenerates even when a player is “offline.” So players have a sense of urgency to login and spend energy after they are full, so that they can maximize the progression of their character. I feel that same sense of urgency with Aion when my AH items have sold – I want to log in, collect the sale proceeds, and put more items up for action.

So how far will cross-channel integration affect MMORPGs? That is, what will the experience be when we are not logged in to the game client? That’s the big question.

Several years ago, the question was which platforms (PC, console, or Mac) a game would be supported on. But the rise of social media and social gaming, coupled with the evolution of mobile devices with high-speed wireless Internet access, is causing structural shifts in the gaming industry. The question is no longer which platforms a player can play on (PC, Mac, console), but rather how does a customer experience the game, regardless of their location. The MMORPG market must innovate, as it did earlier this decade when MMORPGs created new social meaning (playing games with other people in a rich environment), to remain relevant and attractive to consumers.

My hope is that MMORPG game developers will be creative and open-minded in terms of how they approach cross-channel integration. There are the obvious concerns for MMORPG players. E.g. increased out-of-game access (e.g. being able to buy/sell on the AH) could be vulnerable to exploitation by “gold farming” companies. However, at least in the short term, there are mechanics that companies can implement, as NCSoft has done, to allow players to still feel connected to and see what is happening with their characters, even with they are not logged in to the game client.