Competing in World of Tanks Without Premium Ammo (56WR @ 3000 Battles)

During my first 3k battles in World of Tanks (WoT), there have been two questions that I wanted to answer:

I’ll share my insights and tips on improving one’s performance later in this article, but let’s cover these two questions first.

My Stats Without Premium Ammo

As I wrote in an earlier article, the answer to the 1st question is yes. I started playing WoT with no prior knowledge about the game mechanics, and without paying I reached a 51% Win Rate (51WR) in my first 856 battles, which is above the average of 49WR for NA and in the top 20% of players according to wot-news.com.

After those initial 856 battles, I decided to buy gold to pay for a premium subscription to reduce the grind and to pay for other things.

In my experience, the answer to the 2nd question is also yes. I’ve reached a 56WR over my first 3k battles up through tier 9 tanks, without using premium ammo. I don’t use premium ammo for reasons documented later in this article.

Many players believe that you can’t compete meaningfully without using at least some premium ammo. My guildee Sinsun (his stats on Noobmeter) had played over 4000 battles before I started playing WoT, and he told me that without using premium ammo I would struggle to penetrate consistently and be at an unmanageable disadvantage relative to other players who’re using it.

I reached 54WR by 1300 battles through tier 5-6 without premium ammo in Patch 8.5, during a time when there were many tankers slinging premium HEAT ammo to 1-shot foes. Sinsun insisted that premium ammo would be needed in tier 10 battles, which is max level. Based on my understanding of WoT’s game mechanics through tier 5, my gut was that I’d be fine without premium ammo at max level, but I thought it wise to experience tier 10 battles firsthand before stating so publicly.

As a side note, I’ve run into this scenario across many MMORPGs, where I hold a viewpoint that something is viable or functional in PVP that goes contrary to popular opinion. Here’s how this typically unfolds:

I don’t blog or write my guides to prove others wrong. I do those things because I love sharing knowledge and addressing inaccurate perceptions, it’s rewarding to me to hear from gamers that I’ve helped them raise their gameplay, and I learn from them in the process.

The most objective way to measure performance in WoT is by looking at player statistics. Players have stats that reflect their performance, especially when you have a sample size of thousands of battles for a given player. Good players tend to have WRs north of 50%, because they are the common denominator in all of their battles, and they influence outcomes accordingly. Of the various WoT ratings systems, I believe WN7 currently offers the best framework for measuring skillful play based on stats.

Like any new/noob player, my overall stats are bogged down by my early games when I was clueless and not contributing much.

Here are my overall stats per Noobmeter, and for my last 183 battles in parentheses:

The graphs for WN7 Rating, average damage, and average experience have scaled linearly over time. My WR has increased but at an uneven rate. There have been several times when my WR climbs, then plateaus, then climbs again. This is easily explained: whenever I unlock new tiers and tanks, I have to ramp up on the capabilities and limitations of my new tanks and also those of opposing tanks, in particular their weak spots. During that learning period my WR drops, and then it picks up again.

Stats in isolation are hard to gauge, but wot-news.com has an awesome tool that shows relative performance against other players with their “Advanced players statistics” menu option for each server. Here’s how I stack up against the NA playerbase:

My average tier (5.4) is right in the middle of the NA community’s average, and my average damage (772) ranks in the top 15%. Keep in mind that I play mostly heavy and medium tanks, and that influences my stats accordingly.

As with any WoT player, it’s a reasonable expectation that my stats will improve over time, as I master my tanks, learn about the other tanks for a given tier and how to penetrate them, level up my crews, etc.

I have a 3rd question that is related to my 2nd question: is it possible to consistently play at a Unicum level without premium ammo? Over the last week my WN7 Rating was 1681, which is close to the Unicum cutoff of 1700. I suspect once I acquire Tier 10 tanks and are therefore always the top tier in battles with them, my stats will increase.

My Tips for Improving One’s Gameplay

I’m still learning a lot in WoT, but I’ll share with you what I’ve gleaned thus far:

The Issues With Premium Ammo

Welvo posted an articulate take on Reddit on why premium ammo (aka gold ammo) is problematic.

I have lost faith in the players of this game and their ability to do critical thinking. Gold rounds are game breaking. End of story.

If you can’t pen a tank from the front, then so be it. Obviously by design not all tanks are made equal. They all have their advantages and disadvantages and a GOOD player will learn how to optimize them. The type of game you all want seems to be one where all tanks are equal in stats, they just all just look different.

Here are the reasons why I do not use premium ammo:

About that last point, some players defend premium ammo because it is now purchasable with credits, whereas it used to be only acquirable with gold. But here’s the rub. Premium shells are very expensive, e.g. 4800+ credits per shell for Tier 6 and up. A player who is still actively grinding up tank lines and tiers will continually be in a situation where they have unlocked upper-tier tanks but lack the credits to afford purchasing the tanks, upgrades, and equipment – let alone premium ammo. It’s not clear to me whether the high cost of premium ammo would be sufficiently offset by the higher WR gained by using it.

Many players who use this “premium ammo is affordable” argument already have a surplus of credits from many thousands of battles and/or they have premium tanks which they use for farming credits. If they are in the latter situation, they’re funding their premium ammo with their premium tank(s), which were purchased with gold, so they’re indirectly paying-to-win.

The only context where I think premium ammo is an acceptable mechanic is Clan Wars given that serious clans will field tanks with premium ammo, so it’s the norm there.

A skeptic who is unfamiliar with my blog may wonder “how do we know Taugrim has never used (let alone purchased) premium ammo like he claims?” 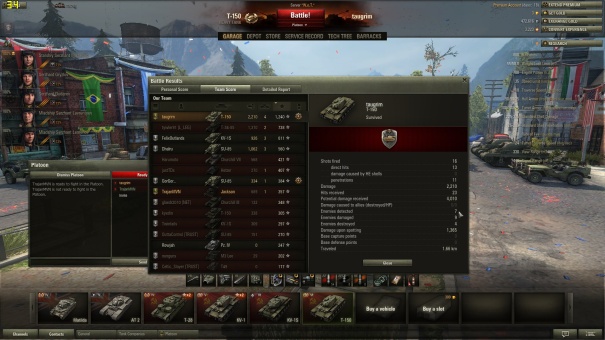 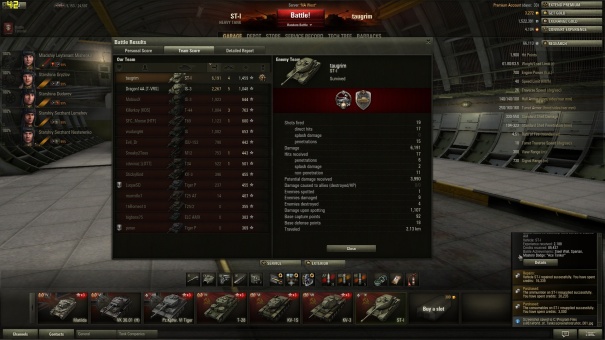 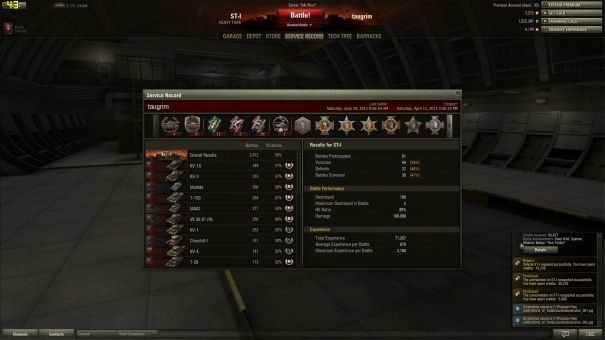 I want to end this article by saying I’m not here to judge others using premium ammo. It’s each player’s choice. I wrote this article to refute the widely-held perception that it’s a must-have to compete at a high level.

Certainly, playing without premium ammo can place one at a disadvantage, but the key thing I’ve experienced is that you can still rock without it.

Let me know your thoughts and feedback.