ArenaNet (AN) just executed one of the most deft and savvy recoveries I’ve seen in addressing player angst about an upcoming expansion.

In January, AN announced the Heart of Thorns (HoT) expansion for Guild Wars 2 (GW2). There was much rejoicing.

In June, AN announced that HoT would cost the same to purchase for existing players and for new players. There was much outrage – check out the Reddit thread Don’t Pre-Purchase Heart of Thorns. The GW2 community understandably felt unappreciated for their loyalty.

AN found an elegant solution to address the feedback as announced yesterday:

This is brilliant, because it balances:

As I wrote recently when Carbine announced WildStar was transitioning to F2P, the vast majority of game developers are simply kidding themselves in this market if they try to launch a game with a subscription (aka pay-to-play or P2P) or as buy-to-play (B2P). The only MMORPGs that could be launched as B2P are those with deeply established IPs, e.g. Guild Wars or Final Fantasy.

That being said, once you’re 3 years into the life of a game, the vast majority of the fans of an IP (whether it’s GW, FF, Star Wars, etc) and/or early MMORPG adopters have already purchased GW2 or made the decision not to try it because of the purchase cost. Part of the value of B2P for the developer is that the purchase price helps to recoup the costs to launch (in this case, many tens of millions $USD), and it provides an ongoing revenue stream. The question about the latter is whether a developer would be better off simply making the game F2P and attracting a broader player base. My belief is that the answer is yes – for a game to sustainably maintain or grow its player base, F2P in this market is a necessity. With the advent of the F2P model, AN can finally attract a much wider pool of potential players.

On top of the F2P announcement, AN also announced that HoT will introduce raids. 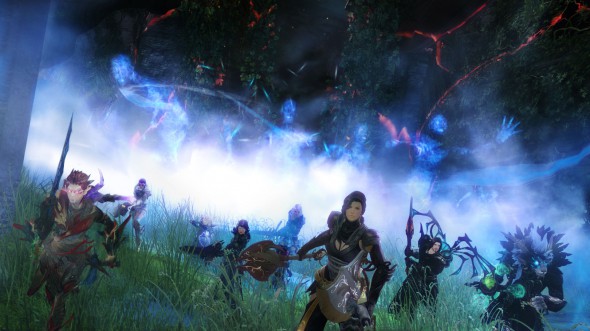 Raids of 10 players is the perfect choice for several reasons:

For those of you who have nostalgia for the old days of 40-person raids, I believe those days long gone. They simply require way too much work on the part of guilds to sustainably run, and for the developer it’s challenging to devise boss fights and mechanics that work smoothly for raids of such scale.

Kudos to AN for thoughtfully solving for the feedback from the community.